I just came back from my first comedy club experience and it was great!  It was awesome because I got free tickets from www.pdxpipeline.com, and I can't remember the last time I got free anything.  I swear i just signed up, entered the drawing, got an email saying I won, and went to see the show...all in one day.  That was just rad in itself.  Plus, the site founder's last name is Chunlick.  That's a shiny gold star in my book.

*now I put the asterisk here because when I sat down I noticed the menu saying 2 item minimum purchase.  Grrr... If I hadn't gotten free tickets I woulda felt robbed. 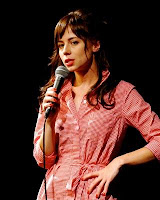 Before I went to the show, I checked out Natasha's youtube clips and they were just awfully unfunny.  But her stand up set turned out to be hilarious.  Okay it maybe because I was forced to get two beers, but she was adorably funny.  She interacted with the audience a lot (especially the 3 single guys up front) and had this dance competition with two ladies from the crowd.  Lot's of silly fun.  The guy that opened for her was trying too hard, and the crowd wasn't having it.  He even fell on the floor on purpose and got like 3 claps (oh boy). I think it was a ploy to make Natasha seem even more funny in comparison.

But the host Ian Karmel was the funniest in my opinion.   Man that guy got things going.  He's one of those hilarious "heavyset" comics that make you laugh extra hard.  I don't know why it is, but when fat comicedians lose weight, they seem to lose a bit of their funny.  (see Seth Rogan, Drew Carey) 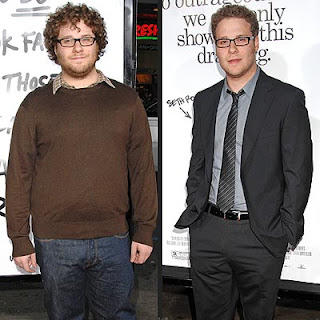 Damn, Seth's lookin' good.  But he looks more like he'll be on CSI than in a Judd Apatow movie. 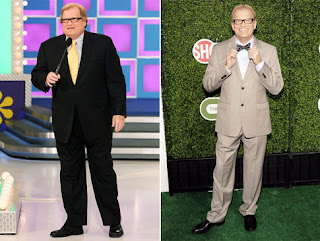 Ok, I never thought Drew Carey was funny, but look at all that weight he's lost!

Going going, back back to cali cali. :)

I'll be here when you're backsies!

PS, let me know if you figure out Drew Carey's secret!