The NBA regular season has just wrapped up, which means this years Fantasy BBall is over and who's the champ? Yours Truly! Man it feels great to win it two years in a row.  This year was much more fun for sure because:

Now what am I gonna spend my free time on?  Yea.. seriously I spent way too much time on this damned game. But it's addicting man.  I didn't draft well, so I was scrounging for the best of the scraps all season.  Which was fun, especially when you find that hidden gem! But really, it doesn't do any good in the real world.  Whatevs.  I got my internet picture of a trophy to keep me warm at night 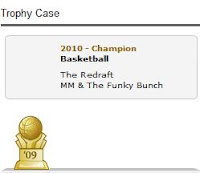 What the F Yahoo, where's my '10 trophy??
Season Summary (warning fantasy nerd things ahead):
Strategy: Just mad stats and researching.  Best time to find a gem?  Trades and injuries that give opportunities to the sleepers.
Resources:
Yahoo! Matt Buser Fantasy articles are solid.

Rotoworld's Headlines are probably the most frequently updated on Player statuses
CBS Sports Fantasy Site: The Most Viewed tab shows the recent hottest players (most added, most dropped)
The Final Five: Out of 13 original draftees, only 5 remained:  Chauncey Billups, Tim Duncan, Kevin Durant, Mo Williams (??), Dorell Wright.
Best Draft Sleeper: Dorell Wright aka DWrightWay.  3's, rebounds, steals, assists, blocks he can do it all!
Mr. Reliable: Kevin Durant aka Durantulla aka Velvet Hoops of course.
Best Mid Season Pickup: Marcin Gortat aka Polish Hammer.  Damn he's gonna be hot next season. Great work ethic, consistent center.  72% FT's too
Late Season Stars: Jerryd Bayless and Jordan Crawford definitely beasted it for the last few weeks.  Couldn't have done it without them.
Pivotal Trade: JJ Hickson!  Thank you to Joey for taking Vince Carter off my hands for him.  I feel bad.  I definitely wouldn't have won without JJ getting enough boards to build Noahs Ark.
Notes for next season: Don't fall in love with a player (see Jamal Crawford, Roddy B, Shane Battier). and especially, Don't fall in love with an injured player (see Camby, Mo Williams, Yao Ming?!).
Playoffs Recap:
So this win was pretty lucky.  but I'll take it! Good game to everyone that played, especially those that played for money.  I hope there will be more in the pot next year!

Please no Lockout, and go Warriors. 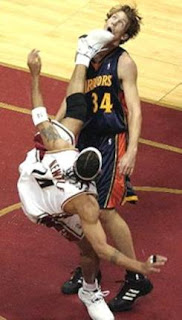 Season's over just in time for you to be invested in a JOB! WHOOOOO!!!

This is Greek to me. But congrats? GO SHARKS!