Hey will ya look at that, my blog is already Orange.  haha, I am by no means a baseball fan, but I've been watching the ends of some of the SF-Philly games, just for fun.  I used to follow the Giants when I was a kid (like 5-12 years old?), trading cards, following stats, all that good stuff.  But I just lost interest.  Playoffs starting in the 7th inning is fun to watch though! 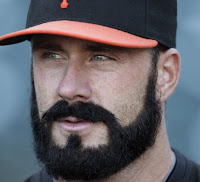 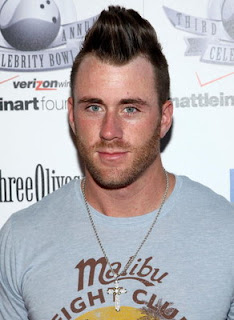 The Same Guy as above
All this time I thought BW was some 40 year old dude looking like a lumberjack.  But no, he's a 28 year old bro.  haha when they showed his shaved pic on TV, I couldn't believe it and just busted up laughing.  It doesn't stop there, he's a hell of a character:
When I was watching the postgame interview, he talks about "The Machine" and I just had to find out:

hahaha man that's awesome. This guy is ridiculous and entertaining as hell.

10/28 Edit:
More Reading on B-Dub
Interview: Why he crosses his arms after saving a game
Most Interesting Man in the World + Video montage
Video: Interview about his Father
Posted by Chun Lick at 11:27 PM

Why do I want to marry him?