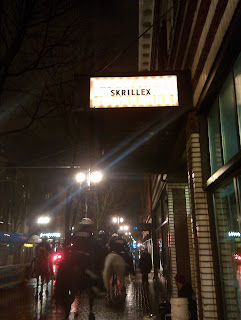 Wow the last time I blogged was in October, which was also about the last time I worked out.  Yesterday I finally went to the gym, and today I'm blogging again! Wooohoo!  What a two month funk, I'm gonna chalk this one up to winter hibernation.
Don't you love it when you're expectations get blown away?  Yesterday I went to go see Skrillex and the Roseland and my mind was blown.  It was so fun raging to dubstep, my buddies going to Wobbleland are in for an epic night.
I was skeptical at first about this event, cus it was all ages, small venue, and Skrillex only had a 1 hour set at the end.  I wasn't sure how big dubstep was in Portland, but the place was packed!

DJ Craze was so good, he's a 5 time DJ World Champion and he's ridiculously versatile.  He played everything: hip hop, OG rap, dub step, DnB, house, and his specialty Miami bass.  True master at the turntables man.  I'm so glad I got to see this guy, I didn't even know who he was.  He definitely made up for the fact that they only had 1 hour sets.

Skrillex was a blast.  The day before, I just stayed up till 5am blasting his music.  It just makes it so much better when you know the songs for the event.  He started off with "Rock N' Roll" and it was mayhem from then on.   The cool part was it was his birthday! 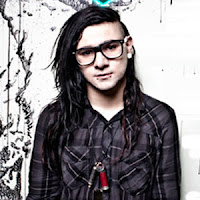 The "Little Gremlin" as Deadmau5 calls him haha
10 minutes left, they bring out a cake with 20 something candles, and we all sing happy birthday to him.  He holds a balloon over it and it pops, blowing out all the candles.  Over the mic: "Portland you guys are awesome! I'm gonna play a song that nobody's heard before!!"  *YAHH!!* Over the mic: "and heres the drop!" BoOM WOOBWOBWOB.  Skrillex grabs the cake, and tosses it into the crowd.  People go apeshit.  He steps up to the edge of the stage and dives into the crowd.

4 minutes left, he ends with his remix of La Roux - In For the Kill.  I can't believe this ends at 1am lameee.  We chant "1 more song!". They promoter gets him to come out, but they already cut the power and everything.  That just made us chant harder.  The mic comes on again :"sorry guys, they cut my controls, I can't do anything. the cops are waiting outside".  But Skrillex aka Sonny Moore was a leadsinger for his Screamo band so he just belts out over the mic "HEY SEXY LADAYY"  crowd goes wild, the controls kick back in, and his remix of Hey Sexy Lady drops with perfect timing.  Ahhh it was crazy.  My neck hurts from headbanging now haha.


La Roux - In For the Kill (Skrillex rmx)

I had a mini orgasm when I found out that you finally blogged.

That sounds beyond epic. I wish I was theree :((

omg, i wish you were going to Vegas. you still can you know..

brian discovered a dubstep dj at grand sierra (by accident) this weekend.. you should ask him about it! he came back head over heels babbling about how awesome this dj was!