I had another chill out weekend, and it was sunny to boot! (I don't know what that means, I just heard that somewhere and I hope I used it right).  Tiana and Julien were in town and we went to go yum cha at Wong's King.  It was so good, I haven't had good Fung Jaos (chicken feet) in a long time.  Julien never had them before and I was hoping he'd try them but he mentions that they look like a baby's hand O_O.  Haha, I see where he's coming from, but I still love my Fung Jaos.   They went to Saturday's Blazers-Suns playoff game and got me these!:

(thats the sound it makes, for real)
Now I can twang by myself in my living room!  (you're sick)  Ahh.. they're so lucky to be there, it was a great game too! With Brandon Roy making a surprise appearance and Blazers with a W. RIP CITY!!!

So a lot of people wonder why Portland is called Rip City.  Even my cousins didn't know.  So here it is:

From Wikipedia:
"The term was coined by the team's play-by-play announcer Bill Schonely during a game against the Los Angeles Lakers on February 18, 1971, the Blazers' first season.[13] In the days prior to the three-point field goal, Blazers' guard Jim Barnett took an ill-advised long distance shot that nonetheless went in, giving the new team hope for a victory against the powerful Lakers. Excited, Schonely exclaimed "Rip City! All right!" Schonely admits that he has no idea how he came up with the expression, but it became synonymous with the team and the city of Portland.[14]"

Interesting how Jim Barnett is now the announcer for the Warriors!  Also from Wikipedia, Portland is called Razorblade City....for its relatively high depression and sucide rates....wonk..wonk..wonk....

ANYWAYS, on Monday Nate called me up to go watch the Blazers game at Mission Theater (a bar theater).  It was awesome, packed with Blazers fans watching the game on a movie theater screen.  Man the 1st few minutes of this game was a blast! We came out in full fury and the Sun's were ice cold.  The theater was going crazy, it felt like I was at the game, so fun!  but.. the Blazers streak got stopped dead in its tracks with relentless foul calling the whole game.  The most memorable and ridiculous one is this one:

Watch it! Even if you don't watch basketball, its so ridiculous!

McMenamin's Mission Theater was a great time out.  They show movies here too and you get to drink, eat meals while you watch!  For those that don't know McMenamin's owns a bunch of restaurants and pubs in Oregon.  Nate and Emily told me that they even have a place called the Kennedy School, which is a ex-school turned into a hotel!  wowza.  another place on the "to check out" list 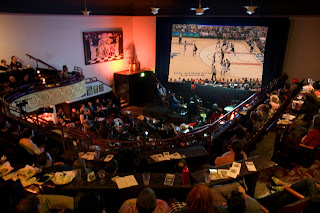 What it kinda looks like in there.  Imagine a sea of red and black, with an endless supply of beer pitchers.(please excuse my poor photochopping skills)
Posted by Chun Lick at 12:05 AM

Someone should be fired!!!

McMenamins is on my next "to check out" list! Thanks!

Warriors and Blazers suck anyways. You guys are rooting for the wrong teams. It's all about the Valley of the Sun! Is your game MVP like Steve Nash?

The Blazers lost me a double cheeseburger.