I know, it's been over the month since I've posted, but it's because I was having too much fun back home.  Now I'm doing a couple of posts in retrospect to reminisce about the good times in June.  The main reasons I came back were because of two weddings.

Wow.  This was the first wedding I've been to without my family, and it was so beautiful.  I remember driving up the windy road through the vineyard hills and seeing the building appear ahead.  Wow.  The word Tuscany came to mind.  I didn't even remember what Tuscany was at the time!  But now that I googled it, I totally agree with what my subconscious blurted out.  I wish I took a picture coming down the road, but here's a close up shot i took. 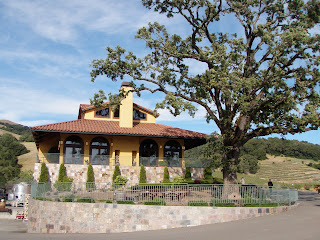 The wedding photographer (http://www.dannyphotostudio.com) took a much better picture (snagged from fb) 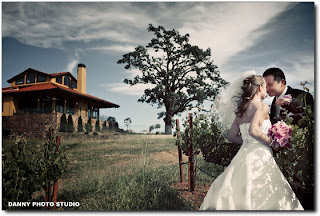 Ain't it beautiful? The wedding ceremony was even more awesome.  It was outdoors and they had a harp!  Man the harp was my favorite part.  The harpist just seamlessly and subtly switched from wedding song to wedding song.  I felt like I was in a movie or something.  Actually my favorite part was when the flower girls came through, it was hilarious!  This little 3 year old girl comes in and instead of throwing the petals on the carpet, she tries to plant them into the dirt off to the side!  She totally stole the show and I wish I got it on video.

I was stoked for this wedding because a bunch of my closest friends were going too.  Originally my brother and I were supposed to play as a duet during the ceremony, but plans were changed.  Oh well, maybe next time! (taking reservations from friends, will play for food haha).  This wedding was also at a vineyard, so it was also very classy.  Hors d' oeuvres and open bar, what more can I say?  We all knew it was gonna be a kickass time, and everyone looked smashing in their get-ups (I heard someone was gonna come in jeans?). 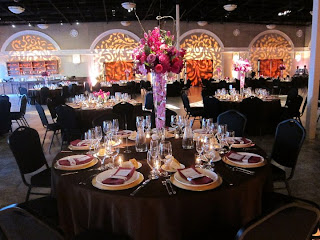 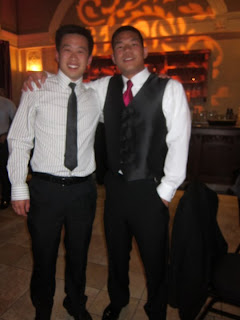 Thanks for the invite buddy, I had a blast!
Who's next?!

I can't wait to see Leeme and Mike's photographer pics!

I haven't been to any weddings yet....... damnit! I'm jealous. The pictures you posted were gorgeous though. Who wears jeans to weddigns??