Basketball, The Twilight Zone and Cousins

3on3 Basketball
So on Saturday I played 3v3 basketball with my cousins and their friends.  I'm not very athletic and I'm terrible at basketball, so I always get a little of nervous when I play a game.  Luckily I was on Dillon and David's team, and they are damned good.  Dillon was doing these crazy layups with a bum ankle, and David was draining 3's all day.  Haha, the guy that had to guard him one game got frustrated after David busted 3 straight shots in his face and yelled: "THATS IMPOSSIBLE!! I COULDN'T HAVE BEEN ANY CLOSER!!"  I did pretty decent, only took open shots, and drove it in couple of times so I had a pretty good time.

But I did do my trademark airball shenanigans once.  Everytime I play with my cousins, I swear this happens.  I cut to the hoop, and someone dishes me a beautiful pass.  I catch it with my back turned toward the hoop a foot away from the basket, do a seemingly easy turnaround short shot, and completely airball it.  Oh man, and the worst part is when I do this, I instinctively yell out a loud aiyah!  (kinda like oh shit, but my chinese-ness takes over) and everyone just busts up laughing because it looks like I pulled something mid-shot.  hahaha fail "(holding in laughter) are you okay chad?"


So I just thought of this when I was driving back to Portland from Corvallis, and thought about it more when I was showering today (I always think of the best things when I'm driving or showering).   So Dillon and I are pretty much the best of pals since he was born (he was born during my red egg party and we all rushed to the hospital).  So here's the eerie parallel universe part:

1.  We both went to agricultural schools (Oregon State and UC Davis) for college to study Mechanical Engineering, about 1.5 hours from home. (interesting.. but not too strange yet).
1a.  An hour away from both our agricultural schools, is a more prestigious school (University of Oregon, and UC Berkeley) which are both known as "Hippie Towns" and smell of it too!
2.  We both had roommates named Frank (zomg)
3.  Both Franks majored in the biological sciences
4.  Both Franks have a proven reputation for high tolerance of alcohol.  (we thought this was pretty cool and laughed about it a lot)
5.  This is Dillon's last year, and he took in a new roommate cus he needed a place to stay for a short period of time.  So I met his new roommate Vince, the guy who introduced us to the boxing pad drills.  Pretty cool dude.
6.  Then while I was driving, I realized in my last year, when Anthony moved out, we took in a 3rd roommate to help cover costs.  What was his name? yea you guessed it.. VINCE.  (WHATTT?! cue twilight zone music!)

My 10 Year Old Cousin PWNZ
(I don't use the word PWNZ much, its reserved for special occasions) 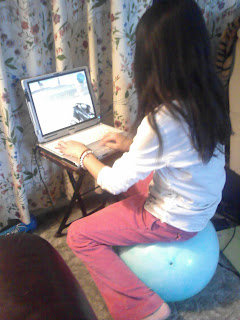 sorry for the long blog post, but I just couldn't ignore this one.   I was hanging out with the younger cousins today and decided to check on little 10 year old Celina.  What do 10 year old girls do on their spare time? I have no idea, because when I was 10 all my pals were guys.  Here Celina is, happily killing strangers on the internet playing her favorite First Person Shooter called Combat Arms using a touchpad.

So whenever you're playing Halo or Call of Duty, be careful.  You might get yourself embarrassed by a 10 year old girl haha
Posted by Chun Lick at 12:15 AM

I also said "aiyah" when I was playing badminton with Sue and her sister. Those damn Oregonians, they bring out the Asian in us.

the coincidences are too strange.. just tooooo strange

WOW WTF, you guys aren't commenting on that FPS ownage? SERIOUSLY. That is freaking amazing.

Lol Henry's response was what I was anticipating!

Our comments are in order of his writing paragraph forming.