So over the weekend, I visited Oregon State to hangout with the cousins.  I parked my car on Friday thinking, wow this is a huge spot.  Oregon is great because you never have to circle around for parking.  But then.. on Sunday I went out for a Home Depot run with David and when I got to my car, it was glaring at me.  Yea. a scratch about 4 inches long and paint thickness deep was on my left rear bumper.  wtf.  some idiot pulled out of the spot behind me and nicked my bumper.  really?! how much room do you need?! godamn.  It was the first significant scratch on my car.  I mean if it was my old used car, I wouldn't have even noticed.  But this was my first.  I thought my first scratch like that would come from parking in tight spots in the city.  OSU students can't park for @&##&@.

Shit Happens, but AlertSF is on your side!


On a brighter note, I was just talking to Alex about AlertSF and its awesomely useful usefulness.  We both got a text today sent to our cell phone telling us about a fallen broken cable on the Bay Bridge at 1925 hours (7:25).  (Luckily no one was seriously injured) About an hour later, it says to not use the bridge tomorrow, because there have not been plans to re-open.  I didn't realize that it impacted me until Alex pointed out I'm going to be using the bridge soon when I come back.  Couple weeks ago, we both got another text about flooding in SF due to heavy rain.  I wasn't in the city, but its a good heads up.  This service is extremely useful, especially during times of emergencies.  It's great knowing that you'll be alerted about any potential dangers in your city within a few minutes on your cell phone.  I have my family on it now, and Alex told his brother, so lets spread the word! 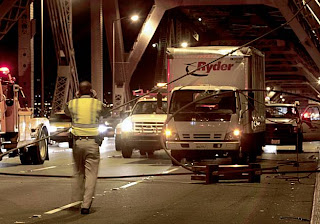 I wanted to blog about alertsf. but then only you and anjuli read my blog. and both of you already have it hahaha

aw man, i signed up for only local stuff on alertsf, and i didnt get the bridge one!

and sorry to hear about your car, that's so lame. freakin drunk college students need to learn how to drive responsibly!

Whenever I read Alex's blog name I always think "Alex Turnips" is that weird? I sure cut out a lot of letters.

I must digg your post therefore other folks are able to look at it, very helpful, I had a tough time finding the results searching on the web, thanks.