Been on a mini-blog-posting hiatus because life has been hectic, but good hectic.  Now that I finished taking the GRE's I can post again. 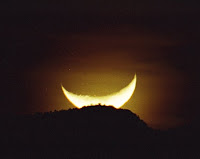 (10/29)Drove back from Eugene starting at 10:30PM !! and we got back to sweet ole' San Franciso at 6:30AM (its great to be back).  The drive was a lot more fun with Dillon and David there.  We actually saw the moonset! I don't think I ever noticed the moon setting before and I wish we had a decent camera.  It just sat there on the horizon getting flatter and flatter; kind of like a ball slowly losing air, pretty cool and funny.  There was also this one stretch of road where there were no cars so i just opened the sun roof.  It was pitch black and the stars were amazing, you could almost get lost in them (not trying to be poetic or nothin', it really felt like that!)  Too bad it was dangerous to look at them for more than a second while driving.  Lucky Dillon and David!! 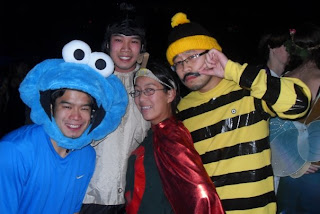 Dillon was cookie monster!! I wanted to be cookie monster last year, but didn't know how.. Angel was Quailman, I was Odlaw >:] and David was a Sumo wrestler.  They were all huge hits amongst the peoples but David's was freakin' golden:

It was the first time my cousins have been to an event like this, and they were stoked!  And boy were they in for a big surprise...when we were waiting in line, we witnessed this one girl in leopard print relieving herself IN LINE 3 FEET AWAY FROM US.  I'm sorry they had to see that, and I'm pretty sure that set the tone for them for the rest of the night.  We finally made it in and saw everybody else, it was good to see everyone again and in awesome costumes nonetheless.  Andy and V's Mickey and Mallory was superb! 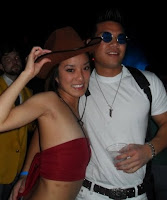 Right when we walk into the palace, I just realized that it was pretty much a Rave haha.  So I turn to Dillon and David "uhh.. welcome to your 1st rave?".  Then almost immediately after that, a druggie comes up to David..:"Dude.. you got any pills on you? any Acid?" lol it was gonna be an interesting night for them.
Later on...
Druggie #2 looks at David in his Sumo costume: "Hey man! you got any drugs in there?"
David: "nope"
Druggie#2: "Man, thats too bad.  You coulda fit a shit load of drugs in there" lol
Dillon also tells me he saw some guy freaking out in the bathroom yelling "OMG somethings wrong with my hands"

Yea, it was pretty shocking stuff for them haha, I hope they had a good time.  I'm sure David did.  That sumo costume caught so much attention from girls it was ridiculous.  It would take forever to walk across the place with him, because they all wanted pictures with him.  Dillon on the other hand, attracted much attention from guys haha.  There were these 3 guys that thought he was the DJ from Crystal Method (cus he was also in cookie monster costume) and wanted pictures and autographs from him haha.

Henry was my arch nemesis, Waldo.  He told me that he got pinched in the ass many times.  I, on the other hand, had recognition issues. No one knew who the hell I was! haha I guess I can't blame them, cus I didn't even know of Odlaw until a month ago.  Some funny quotes of the night: 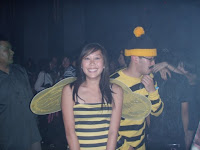 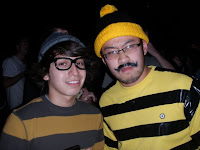 Finally, someone who gets it :)

Best music of the night was definitely Infected Mushroom.  I saw the cousins get into it rocking out, and saying "yea you were right, they are awesome live."  Then in the car ride back Dillon goes: "To be honest, the music the whole night sounded exactly the same to me" (face-palm). 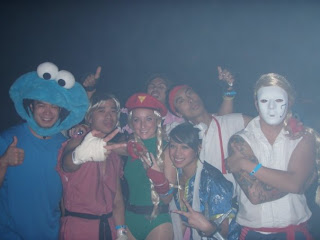 You like szeto's sriracha cuz you loves the cock sauce!! haha jk, too bad you didnt switch with one of your cousins on the drive back to look at the stars!! or maybe you could have even pulled over to look at them.. im sure there wasnt very much traffic LOL the sumo video is so coool i would have wanted a pixer with him anyway..

next year we should totally do a group costume and plan things out.. some cool kind of group costume.. like sailor scouts! LOL