What a great show!  It was everything I had expected from all that "Tiesto Training" that I got from Andy for the past two months haha.  When Kaleidoscope came on, I was in awe that I was actually there with the visuals playing in the background.  The only bad part of the show was that it ended so soon!  Tiesto was great! His set seemed seamless and time passed by so quickly.  It would have been awesome if he played till 4AM.  I spent most of the time on the dance floor this time with the lumberjack gals.  I thought it was awesome how they surprised Tiana for her birthday.  She totally thought that she couldn't make it to Tiesto because her buddy Holly (heh) from Oklahoma was in town.  But Holly was in on the whole thing too!

Oh this time Henry bought these lightshow gloves and I was messing around with them on the dance floor and gave 3 of my friends (forgot who?) a ghetto light show lol.  Andy tells me later that I was actually doing it for 8 people including randoms!  pretty embarassing.

Highlight of the night was definitely seeing Brian and P there having a great time! haha it really made my day.  Wish I had more time to hangout with everyone in the stands.  Oh! and we finally got our Lafayette picture taken (stolen from Steph stolen from Henry): 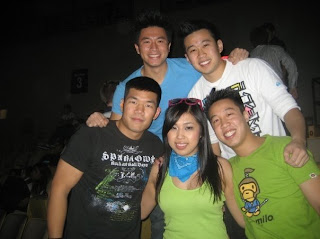 
Chill Out
This time, Gary had a great idea for an afterparty at his house.  He had some spare mattresses in his garage so he just put them on the floor of his room.  They fit perfectly and his entire room was just mattresses (2 fulls 1 twin)  It was perfect and hella comfortable, just what I needed after Tiesto.  We just sat there reminiscing about the night and listening to songs with visualizers on his big screen TV.  Best chillout party.  I think I fell asleep around 7-8.  We had lunch later on at Pho Garden.  That place sucks.  Soup was bland, meat was chewy, noodles were dry.  Its a wonder people complete the pho challenge!
Posted by Chun Lick at 12:00 AM

LOL pho garden is only good for the challenge, their pho isn't tasty. omg the bed-floor party is such a great idea.. sounds like lots of fuN! why does gary have spare mattresses LOL glad you had fun though!

Tiesto was AMAZING and your lightshows weren't too ghettoo. I was so excited to see Henry bust out his gloves though. good times...good people...

random fact: did you know that holly didn't even know what her name meant until i showed her last year? she's jewish, so she was never really exposed to the holly associated with christmas! but she does get a lot of references to weezer songs :P