I just popped two Vick's Nyquil Gel Tablets (funny story about Nyquil that I read before) so that I can hibernate away this darned sickness.  So there's a good chance that you might see a "aoeu;esrughager" at the end of this post.  Hopefully, I'll be able to stay awake!

Thanksgiving Trifecta
Every year, Gary, Henry and I have a thing called the Thanksgiving Trifecta.  We each reserve a day on the Thursday-Saturday timeslot for our families' Thanksgiving dinners.  This way we all get to feast for 3 WHOLE days! How awesome is that?!  I was talking about it with Gary and it seems like we've been doing this for about 6-7 years in a row now.  Unfortunately, this year Gary and my dinners conflicted due to lack of foresight so we both had ours on Thursday.  Oh well, we all hung out this entire weekend and it was still a blast.  The only drawback to this 3day feast is...yep: Holiday Body.

Disappointment after dissapointment
After our dinners, everyone came over to my house and we played video games and Apples to Apples.  We all started to get food coma so we decided to go out for some coffee.  Haha this story is about Gary's dissapointments throughout the night. We ended up at  Creations in search of ice coffee or milk tea.  But we started looking through the menus and couldn't find the two! So Andy asks the waitress:

Andy: do you have milk tea?
Waitress: nope
Andy: what?! no nai cha?! how about coffee
Waitress: no we don't have
Gary looks through the menu: Can I have the sweet and sour radish?
Waitress: we ran out of that. (by this time we're all chuckling)
Gary: What?! no sweet and sour radish?! I'll have the black sesame porridge balls then (thinking that it was the white balls with black sesame filling).
Andrew orders: How's your house ice cream? is it good?
Waitress: No. (now we're dying from laughter, how can she say no!? lol)

The best part was when Gary gets his sesame porridge balls.  It came to the table looking like this: 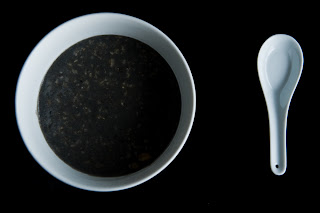 Lol Gary's face was priceless when he got that bowl of black muck.  He was like "ARE YOU SERIOUS!?!" hahha.  Man there's some changes to be made at Creations.  That was such a bust for Gary that night lol.  Afterwards we went to 7-11 to get some coffee and... it was watery as hell (you could see through it).
Posted by Chun Lick at 11:36 PM

Such a failed food adventure, and I can't believe they served you black sesame soup, that's fucking gross LOL and SO IS 7-11 COFFEE!!! I think 7-11 is instant coffee... it tastes like it at least!

Thanksgiving is fun times, but just like you said, HOLIDAY BODY. Time to gym jam!