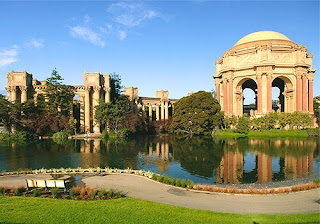 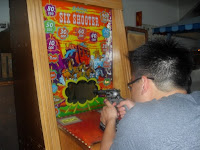 Went to Exploratorium on a whim today with Morgan, Mark, Jason, and Andy.  I rarely hang out with those guys and it was a great time out.  Plus, it was free (1st wednesday baby!)  Exploratorium is just one of those places that you can let loose, have fun and explore.  Another great place like that is the Antique arcade (http://www.museemechanique.org/) at Fisherman's Wharf (yep they moved it from Sea Cliff).  Just going once in a while is refreshing and nostalgic.


Favorite and Notable stations:
1. Getting your fingers shocked station (this is my long time favorite, I just like getting shocked for some reason o_O)
2.  Lie Detector station  - this was a new one! it reads your sweat level from 2 fingers and shows if you're getting excited or not.  Pretty hilarious when we told someone to picture Andy naked and the excitement graph shot way up! haha
3.  The mirror float station & wall snapshot station - oldies but good clean fun!
4.  Scare Station - You sit in a booth that does something to startle you and you get to watch your reaction, pretty hilarious.  Too bad Andy ruined my session by scaring me b4 the actual scare thing.
5.  Reaction Time game - Competition is fun!
6. Oh yea... the Toilet Bowl drinking fountain really did make me hesitate.  It was saying how even though its completely clean drinking fountain, you'll want to yack just because you have certain preconceptions about toilets. Not Andy though. Not Andy. He drank from the bowl, impressive!

Shoulda brought a camera. The End.
Posted by Chun Lick at 12:58 AM

Should have used your phone camera!! And OMG I didn't realize the antique arcade is not longer at Seacliff. Man, there's just nothing at Seacliff now LOL