Sorry about that. But it's 4AM, an ungodly hour to scream in real life.  I just can't contain my excitement right now so I'm having trouble sleeping.  So....Here's what happened (Warning: lengthy nerd talk ensues):

DSL Drama
So the past few days, I've been having a shitty unstable DSL connection that would crap out ONLY at night.  My DSL has had random periods of solid connection, but spurts of disconnecting for many years now and I have never been able to resolve it completely.  The only thing I've noticed is that it always happens at night.

So I call the Sonic.net support rep a few times, and every time they keep telling me: "Sir your line seems fine"  "please check your filters blah blah"  "reset modem, reset router, reset computer" (reset this <^>(-_-)<^>!!!) and we could never figure the damned problem.  On Monday, support guru "John" tells me I should probably switch out the modem and see what happens.

By now, my patience has worn thin, so I head to Best Buy the next day and buy a complete set of Modem and Router.  I never buy electronics from retail stores, but I was fed up and needed a solution QUICK.  Luckily Angel's cousin was working there and I got a discount to lessen the pain :)  It was a nice router though, because it had NAS support (Network Attached Storage) so that I could access a USB harddrive from anywhere in my house (and maybe outside my house too!)  I was so happy.   I plug everything in that night, and man everything was so snappy, solid connection, cool features = BLISS.  I've never had a network up and running by just plugging things in.  This was a great sign, and money does buy happiness haha. 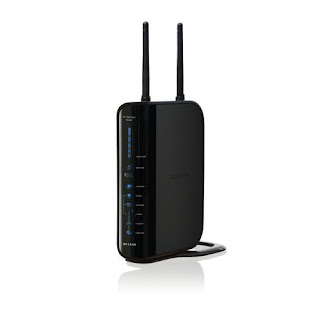 The Belkin N+ router, the answer to all my prayers?


wtf.
So this setup is running great until Wednesday, when the guys were over after we went to the Exploratorium.  We exhausted our burritos, boxing, and Mario Kart and got bored as hell, so...let's just look at stuff online! (SCREEEECH!) Internet is dead again.  wtf.  I just dropped 100+ on a new network and it conks out on me.  I'm just floored.  Morgan tells me about his similar DSL problems, and said it was due to worn out rubber around the phone lines outside his house.  Hey! maybe that's it!  I call Sonic again, so that I could have them send a guy over, but they are assuring me that there's nothing wrong with the line.  At that time, the DSL is working again so I just hangup and give up for the day.

Then God said, "Let there be Light" and there was light, but my DSL got the died.

Today, I finally found the problem to all my white hairs and pimple outbreaks.  I turn on the ultra-bright Halogens in my room downstairs before I went to sleep, cus they're right next to my bed.  That way I can turn them off with my foot once my head hits the pillow.  Internet Dies. (oh here we go again).

Then a crazy idea pops into my head: "what if the lights are causing the DSL blackout?"
I turn off the halogens. YouTube Loads.

haha reminds me of the light switch Friends episode:

Fast forward to 3:20 for relevancy


The Answer: Science
Here's what I found researching online:


Some DSL modems are overly sensitive to RFI (radio frequency interference). Lighting dimmer switches and/or electronic (non-magnetic) power supplies for halogen lighting are a common source of such interference. The result can be a degradation of DSL performance or even a complete loss of DSL sync, even when the source of the interference is not in close proximity to the DSL modem (because the interference can be not only radiated, but also conducted through building wiring). 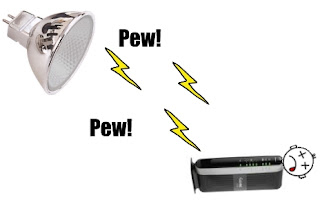 Who woulda thunk it?


As Bill Nye the science guy says it: Science Rules.

So... if you guys have erratic behavior with your DSL, it could be your lights!
Posted by Chun Lick at 5:09 AM

OMG. Do you realize that this is a lab write-up? LOL!!! You have an objective, materials, the hypothesis, the steps, and then the conclusion. You even drew out the diagrams. I think you get an A!

And I miss watching Friends. That show was so great.

Holy Crap! I'm gonna plagiarize this! gonna use this for a science lab if we have to do one. haha

What's up everyone, it's my first go to see at this
website, and piece of writing is actually fruitful designed for me,
keep up posting these types of posts.

Here is my site: line of credit

Attractive section of content. I just stumbled upon your site and in accession capital to assert that I acquire in fact enjoyed account
your blog posts. Anyway I'll be subscribing to your feeds and even I achievement you access consistently fast.

Look into my page :: Www.renmenbi.com

Spot on with this write-up, I seriously feel this site needs a great deal more attention.
I'll probably be returning to read more, thanks for the advice!

Heya i'm for the first time here. I came across this board and I find It truly useful & it helped me out much. I hope to give something back and help others like you aided me.