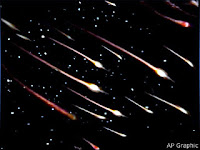 Just came back from trying to see a Meteor Shower tonight with Andy.  The last time we tried to see one, it was foggy as hell and we couldn't see anything.  Tonight was a lot clearer, we went up to Land's End and could actually see a bunch of stars.  We were out there for almost an hour and I didn't see shit!  Andy saw two trails; the sky must hate me.  As I was laying there I heard a "seagull" noise, but.. seagulls don't come out at night right? Must have been something (or someone?) else haha.  Anyways, we were about to leave... and suddenly! I see a burst of light flying across the sky! ...It was Andy flicking his cigarette.

Next time, sky.. next time.


Science Time:
So we were wondering if there was a difference between meteor showers and a falling star.  Turns out, they're the same.  Falling stars aren't stars.  They're caused by cosmic debris or rocks (meteoroid) entering the earth's atmosphere and burning up.  Cool.
Posted by Chun Lick at 1:39 AM

I bet the seagull sound was ANDY hahahahahaa, he so WOULD do something like that! And it's okay, I didn't see any shooting stars either =) Next time maybe!