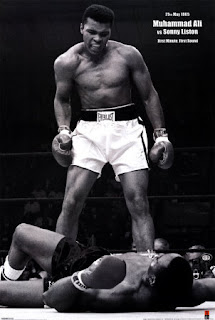 K, this one's going to be all about fighting, because I just came back from Gary's house and we were messing around on the Boxing gear that I got from a few posts back.  I'm glad that everyone that I showed them to were really into it, and I'm sure they'll get a lot of use.  Heck Andy, Henry and I were boxing buzzed after we left Supper Club haha, it was funny.  The first thing that comes out of everyone's mouth (including me) was "wow this feels great!"  Haha, I'm sure everyone has wanted to punch something sometime in their life, and it does feel great to let it all out without any consequences of injury.  and the cardio is a nice side effect :) 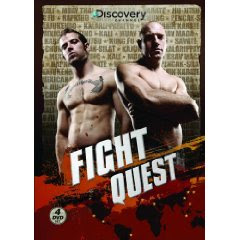 I just finished all the episodes (13) of Fight Quest, a show that was on the Discovery Channel.  I don't know why it got canceled, but it's a great show.  The season follows two guys: Doug (Iraq Veteran) and Jimmy (former math teacher and MMA fighter) across the whole world trying their hands in different martial arts.  They pretty much get a 5 day crash course where Masters train the hell out of them, and they end each episode duking it out with a native fighter.  It is really fascinating to learn about all the unique technical and cultural differences between each fighting style.  What I like best is that these guys have such humble attitudes and aren't out to "show up" other styles in their native settings.  They really put their hearts into learning each art, and have a never-give-up attitude.  The fighting is so raw and educational at the same time!  My favorite styles from the show are Muay Thai, Brazilian Jiu Jitsu, Wing Chun, Kajukenbo, and Hapkido.  If you're into MMA, I would definitely recommend this series.

The Fight
So the fight is coming up soon during Christmas between me and Dillon.  I don't really care right now what the outcome is, but I'm really happy about the lead up to the fight.  This is because I have never worked out so consistently in my life.  It's always been 2-4 weeks on, 1-2 months off (repeat).  I want to have a fight to look forward to maybe like twice a year haha.  I talked about hundredpushups, twentypullups before, and I'm actually sticking to the 6 week program! Sure it's taken me like 10 weeks to get to week 6, but I'm there now!  I haven't tried maxing out my pushups, but I made my personal best in pullups a couple days ago.. 17! I was stuck at 12 for the longest time, and I really wanted to get up to 20 (so I can get a free Marine's T-shirt at one of their booths haha... maybe when that happens there will be another blog contest for the t-shirt?)  But yea, I feel really good right now and I think by Christmas I should be in the best shape of my life!
Posted by Chun Lick at 12:04 AM

Idk why but I can't ever get into the whole MMA/UFC movement.. It's cool that you've got motivation to work out though!