Just had a really fun weekend.  It's so much fun dressing up for parties, because everyone's in a silly mood having a grand ole' time.

Lumberjack Party
So Gary got us these suspenders to go with our costumes, and when we first put them on they were WAY too tight.  We had to "pick a side" to get comfortable, if you don't understand its cool don't worry about it :)  It was funny because Andy was just wearing his regular everyday clothes, so it was pretty much a Dress Like Andy's party.  I love walking around in public in costume though, we went to Delano's to get some whiskey and beer and got some funny looks haha.  The house party was great! There were so many costumes that I didn't expect.  Like Tiana's bear costume! That was hilarious, she actually gutted a stuffed teddy (Albert?) and wore it like Ben Stiller in Tropic Thunder. 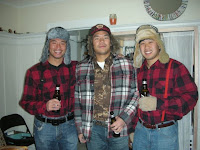 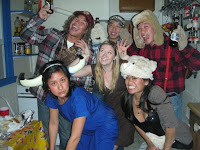 With Forrest Gump, Babe, the Log, and Bear! Sweet costumes

90's Party
For Mel's bday we all dressed up 90's style and headed over to Club 1994.  The music was pretty friggin' awesome man, it was a really fun night.  It was fun singing along to all these middle school hits  "everymornin there's a halo hangin from the corner of my girlfriends four post bed"  "I...like.... big butts and i cannot lie you other brothers can't denyyy"  major karaoke fest, it was a blast!    There was also a bunch of friends and friends of friends out, which was awesome.

Highlights:
- Seeing Gary the Hoff's doppleganger (blondie wearing a red top)
- the boy band screams, it was like I was at a real concert
- Leslie rapping to Gangsta's Paradise, she's a G 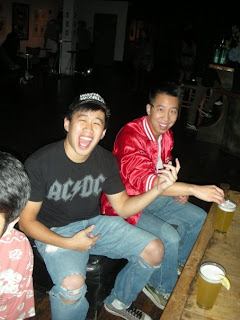 Yeah I hadn't even realized your hat was duct taped LOL omg that party was so fun... I barely had a voice left on Sunday morning from all of the screaming.. SO FUN!!!!