I hope you had the time of your life

That was the song that I last heard from Andy's car (reminder: get Andy's CD), and we were karaoke-ing the hell out of it.  It also wasn't the only song that we karaoke'd.  We sang a crap load of songs throughout tonight.  Man today was a regular day that turned out to be one of the funnest random days I've had.  I wouldn't say it was the time of my life, but it was pretty damned awesome.  And I'm sure Andy, Gary, Henry and Kevin can vouch for this haha.


Mundane Morning
Morning for me these days is pretty much after 12PM haha so bad.  I was planning on going to this WIA orientation at one of the EDD One Stop Centers to find out more about government subsidized training, but... I arrived late.  Poo.  When I got to the area (that Market, Mission area that confused the hell out of me) I hella couldn't find the place.  So even if I had skipped my "morning" shower, I probably wouldn't have made it.  Oh well.  Henry got off early, and Gary took the day off and it was a sunny day so I wasn't really kicking myself.  We ended up playing Altered Beast and River City Ransom at my place, fun!

It was a pretty warm day for Autumn so we met up with Mel for fro-yo at Lakeshore Plaza.  Something like Nuubi Fro-Yo? I think it was new.  It was selfserve and I went way overboard on mine.  There were like 12 flavors! So I just went crazy.  I had 5 different flavors and 5 different toppings.  Total cost? $4.49  oops.  Next time I gotta control myself.

Spontaneous, Ambitious, Delicious
Hmm.. that spells SAD.  Which is what we would have been if everything didn't fall into place like it did tonight! (heh maybe)  So at Lakeshore, Henry get's the ambition to be spontaneous and buys a set of Boxing Gloves and Mitts too (relevance).  Here's when the day started getting fun.

I was originally planning to eat at home, but Andy mention's Chinos and cleverly lures me to eat at Henry's house.  We ate some, played some rockband, and we started boxing!  I had brought my gloves too, so now we had two sets.  Perfect for some light sparring.  This is what lured Kevin to Henry's house haha.  It was a lot of fun sparring with each other.  We got to test our own fighting skills (since training mitts don't really do that) and just randomly fought each other.  I felt so uncoordinated in a sparring match! And it's actually pretty hard to get a good hit on the other guy.  I think I fought Gary and Henry, and man when you get hit in the gut you feel it.  But the gloves give good enough protection to not do any lasting damage.  I'm so glad that everyone was so into it! Good investment.

Gary decided to go to Safeway and buy some Wine haha.  So random.  I felt like it turned into a Ladies Night: Men Edition.  Wine and Boxing? Great times!  While we were sipping on the Reisling (quite tasty, sweet and sour, i like!) Gary bought, we watched Man Vs. Food on the Travel channel.  I swear the host is going to die of some heart disease.  A 4 patty hamburger thats got the diameter of your head? That can't be good.

Then this show Meet the Natives came on, and it was actually pretty entertaining and interesting!  It's about 5 tribal natives from an Island in the South Pacific coming over to the US to see what life is like here.  Those guys are so naturally funny, and they're really looking at our world with virgin eyes.  They described a sleeping bag as a "tube" and have never seen a snake (which one of them was terrified of ).  In a way, this show may be exploitive, but I think it's always interesting to see cultures mingle (why travelling is so fun!).  They were exposed to cattle ranchers, New Yorkers, and even "the Orange County people".  Man those people are so superficial it makes us look bad.  The OC'ers explained to the natives that they had a lot of mirrors around the house, because "you always have to make sure you look good in Orange County".  They even brought them to a Botox injection appointment, which was pretty cringe-worthy. 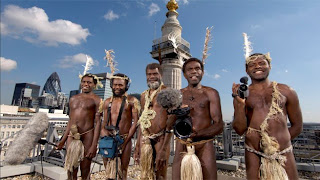 But the most interesting part were the questions that the tribe wanted to be answered during their 5 ambassador's vacation.

Very interesting perspectives coming from a tribe that has never been exposed to our kind of society.  It's pretty cool how people exist in a society that is entirely untouched by "modern" technology.  It's also refreshing to see the happiness the guys had living a simpler life.

It's Peanut Butter Jelly Time!!  So another food program comes on showcasing different unique restaurants around the country, and by now all our mouths are watering.  This one restaurant in LA I think serves only Peanut Butter Sandwiches.  Once we see the Peanut Butter/Marshmallow Fluff sandwich, we start looking at each other.  We're like fuck it, we gotta hit up Safeway again and make us some peanut butter sandwiches haha.  It was SO worth it! and this was when we were all buzzing from the wine.  We picked up bread, Peanut butter, Strawberry Jam, Marshmallow Fluff, Condensed Milk, Nutella, M&M's and Lactose-Free milk (to prevent Andy's lactose farts, which happened anyway).  Haha yea, we went all out on creating many different combinations of PB sandwiches.  I only had room for 1, so I made the PB and Marshmallow.  It was sooo delicious! Really hit the spot.  Some other combinations we made were: Jam and Marshmallow, Jam and Condensed milk, Jam, PB, and Marshmallow, and Andy's famous, PB, M&M's, condensed milk, and Jam.  (need to grab pictures from Henry's camera)


It's Karaoke Time!
Lol for some reason when we got back from Safeway with the sandwich ingredients, we were breaking into song left and right for the next of the night.  It was hilarious and felt great to belt out our favorite ballads.  I think we were buzzed and hyper from all the sugar.  Lol we were so ridiculous.  We also streamed Karaoke from Youtube on Henry's big screen TV.  I swear we never have to hit up a Karaoke place again. We sang


Man it was so awesome, we let it all out with no care in the world!

Gary said it best: "Should this be a Thanksgiving tradition?" aha maybe, maybe not.  But I'm down for more nights like this.  Good clean random ass fun.

Sorry for such a long post haha.  I mostly write about events for myself to remember later down the road.  And today was a memorable day.  If you made it to the end, you are awesome!!

Awh you guys had so much fun!! I feels left out! And I am suddenly hungry, for pbj&marhsmallows, and FROYO!!!! I can't believe you got 5 flavors, that is soooo gross LOL but I think I did something similar to you the first time I had froyo but mine ended up being $5. NEver again did I do that.. LOL

Your karaoke at Henry's reminds me of karaoke-ing at Brians house! When he had the XBOX and we were just scrolling through songs. Good fun! Esp Avril Lavigne and BSB songs <3 <3 <3

sometimes the best times with your friends are random, silly adventures! i was wondering what the story was behind kevin's fb status. you see now why girls are so territorial about their "ladies nights." hope you have many more "men editions"!