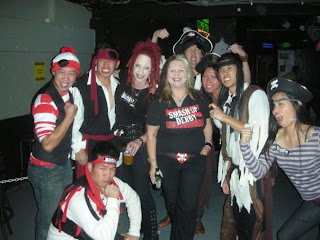 I'm posting this a little late, because I partied too hard.  The Pirate Party was Saturday, and I still haven't recovered yet!! I'm so nauseous @_@, I don't know why?!  But it was well worth it.  It was definitely the best and funnest birthdays I've had, and the pictures prove it.  (Gary's Photo Album) I swear there were like 20 Pirates strong that showed up at Bootie, and we let ourselves be noticed!  Right when we walked in, the house DJ's Adrian and Mysterious D come up to us looking for the head pirate (me  :D).  They gave us a roll of free drink tickets!! (thats 11x$6).  That definitely got the party rolling.  It's sick to have so many of your close friends down to dress up just for the hell of it.  haha so many people told me that now they feel like we gotta dress up everytime we go out!

Oh Yea! I almost forgot!  we went to eat at Cleo's and we got free birthday cake from the Samoan party next to us! It was like the stars aligned, and we got free stuff wherever we went! 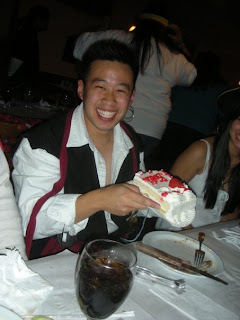 Your post has so much excitement.. and exclamation marks!..!!

WE PARTIED TOO HARDED