It was crazy hot.  My mouth was on fire, face was burning and my entire upper body was on pins and needles!  It was a hell of an experience.  So I went with my cousin to Chicken BonZ for all you can eat chicken wings (lemon pepper is de best).  He was doing a video project for class about eating competitions and he decided to go to Chicken BonZ to eat their Infinity Hot Wings and document it.  He had eaten the IHWs before, and vowed to never ever eat them again.  But having short term memory in one hand, and pride in the other, he decided to go do it again.  Being the great cousin I am, I decided to give him moral support by foolishly eating the wing with him. 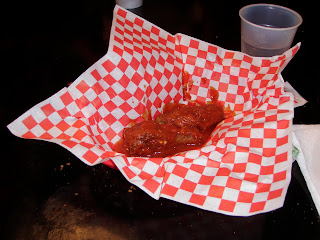 If you can't see the wings, don't worry.. they're there. (...there there there)
I vow not to ever eat the IHW again.

It was pretty funny, we both bought a quart of milk from the nearby Safeway.  The waitress thought we were foolish to order the IHW "sure... if you really want it... at least you guys are prepared! (looking at the milks)"  But yea, that sauce is so spicy.  I didn't feel anything through the first wing, because I was focusing on finishing it.  But once I bit into the second wing, it hit me like a tidal wave.  I couldn't even finish the second wing.  Everbody was laughing about how my face was sweating so much it looked like I just came out of a shower.

(pics and possible vid?  TBA when available)
Posted by Chun Lick at 11:58 PM

Count me in when I visit Oregon.

haha best story ever! chicken wings are my pick when i get attacked by the munchies (henry would know).

my sister and i went to wing stop for the first time a few months ago and i was SOLD.