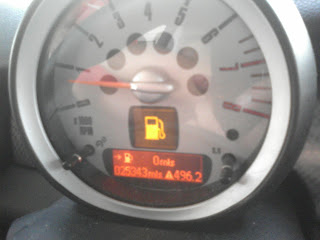 I usually get around 400 for a tank.  but 496.2! That came out to 36.25 MPG.  (previous record was 462miles from my Davis to Eugene trip on one tank)
Who knew driving economically could be so fun?  The ambition, the panic, the pure joy.  Now I know why "Hypermilers" do what they do.  This can easily turn into an addiction.  Good times ol' chap.  Good times.
Posted by Chun Lick at 12:19 AM

I didn't realize headlights had anything to do with fuel consumption, I thought they ran off of the battery ?

This reminds me of when we tried to put the car on neutral and use our forward momentum to push ourselves on the straight path to Emerald's place.

@Cora: I think any electrical uses in a car affects fuel consumption (but very minimally). Something about a higher draw from the battery causes the alternator to work harder which puts an increased load on the engine.